The Canadian Index fell by 9% in August, but then rallied and roared back by 13% for September. This easily topped the Toronto Stock Exchange’s Venture Index, which only increased by 0.6%. 15 of the 18 companies in the index turned in a positive result and 13 of those businesses experienced gains of over 10%. Canada is on fire as two Canadian provinces introduced their new adult-use marijuana program regulations in September. 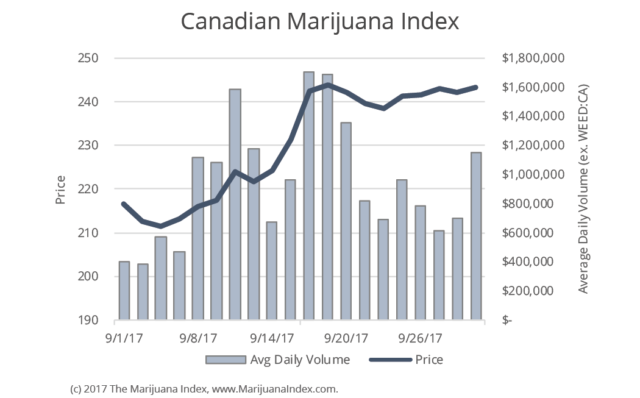 Canada is on fire as two Canadian provinces introduced their new adult-use marijuana program regulations in September. Ontario said its new program starts in July of 2018 and will be similar to the alcohol industry by using cannabis retail stores that are operated by the government. Although Dan Nicholls, Manager of the Index, noted that the Canadian Index only popped by 1.2% that day. New Brunswick said that Organigram Holdings (OGRMF) and Canopy Growth (TWMJF) will handle distribution of adult-use marijuana in its province. That sparked a rally and Organigram, jumped by 26%, while Canopy Growth moved higher by 7%. Trading volumes rose by 127% over August.

The U.S. Index didn’t have as stellar of a September as stocks fell by 1%. Half the companies had gained, while the other half declined. In the last few days of September, stocks rallied, but it wasn’t enough to tip the index into the black. The overall U.S. stock market moved higher with the Dow up by 2.1% and the Russell 2000 climbing higher by 6.1%. Trading volume fell by 16% in September from August.

The overall Marijuana Stock Universe, which includes 228 stocks from the U.S. and Canada increased by 3% on average. The winners were led by the real estate and cultivation sectors, which increased by 23% and 10% respectively.

RT @ellieosiegel: With 48 days until the election, we are finding ways to let voters in New Jersey know Cannabis is on the ballot and why t…