House of Hemp: Could Hemp Disrupt the Building Sector?

CBD Makers Are Finding Online Advertising To Be A Challenge

The Federal government says marijuana is illegal but is sanctioning cannabis advertising in an airport. Organa Brands, one of the largest privately owned cannabis companies launched the first ever in-airport public service announcement (PSA) about cannabis. SecurityPoint Media is the company behind the campaign and whose programs have been vetted by the Transportation Security Administration (TSA).

The campaign will debut in airports in Southern California with branded trays across all terminals at security checkpoints. The message will read, “Cannabis is legal, traveling with it is not. Leave it in California.” It is expected to be seen by 15 million people.

Organa Brands approached SecurityPoint Media with the idea and is paying for the PSA. The airport has the ultimate say over the campaign and its wording. “The TSA doesn’t get involved in ad copy,” said Joe Ambrefe, Chief Executive Officer of Security Point. “All the airport people approved of it,” he added. Ambrefe did concede that the TSA does have its eye on it and would step in if it was problematic. “It’s a positive message,” he said.

TSA officers do not search for marijuana, but if they observe it can refer the matter to a law enforcement officer. The TSA was established in 2001 following the September 11 attacks to detect terrorism and was moved to the Department of Homeland Security in 2003. 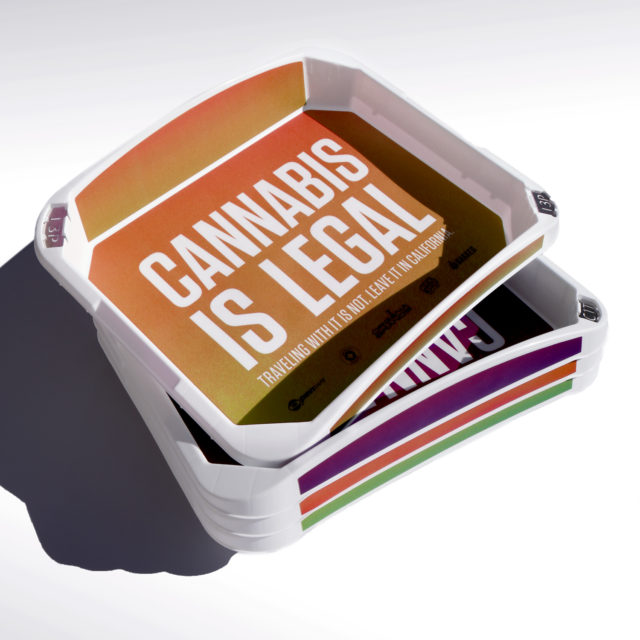 “When we first came up with the plan, we thought there was no chance that the airport or the TSA would ever approve us running a PSA in this space. We are still so amazed to see them in use at the airport,” said Brittany Hallett, Marketing Director at Organa Brands. Organa Brands believes this public service announcement will lead the movement for the next generation of cannabis advertising and legitimize their position as a cannabis powerhouse.

“This is a step in the right direction toward further acceptance of cannabis as a mainstream business,” says Jeremy von Heidl, Co-founder, and President of Organa Brands International. “We wanted to get out ahead of recreational legalization in California with a meaningful public service announcement. The security trays have been a great way to reach our consumers and the reaction has been overall very positive. I think it’s a huge sign of changing perceptions around cannabis that you can walk into an airport and see our brands and our messaging in security trays at the checkpoint.”

The 12-month campaign is seeking to educate cannabis consumers as California enters its first year of legalized adult use marijuana. In a statement, the company said, “By running a public service announcement in a major airport for the first year that California offers recreational marijuana, Organa Brands hopes to ensure the focus at the security checkpoint remains safety and security.”

Hallett said, “The message the trays carry is an important one. We’re very excited for the public to have better access to this information as we move into a new recreational market in California.”

Debra Borchardt is the CEO, Co-Founder, and Editor-In-Chief of GMR. She has covered the cannabis industry for several years at Forbes, Seeking Alpha and TheStreet. Prior to becoming a financial journalist, Debra was a Vice President at Bear Stearns where she held a Series 7 and Registered Investment Advisor license. Debra has a Masters degree in Business Journalism from New York University.